Three Games from the Stormgate Wedding

These three sessions were set at the wedding of the lord and lady of Stormgate Castle, a fortress in Vorasund Keep. Their reception was host to adventurers and bards, assassins, wizards, and mythical creatures from across the realm brought together to celebrate the continuing legacy of the Stormgate lineage. These are their stories.

One For the Road

Seated together during the Stormgate reception, the others learn that Absolut has lost his wedding gift, and given his state, they offer to help 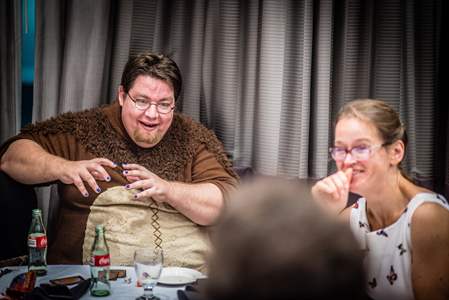 him out of his predicament. Consulting the Assistant to the Seneschal's Assistant in the lost and found, they uncover a tragic dimensional intersection that's left a gaping portal in the back of the closet, a gateway to a cracked red landscape shot through with flames. Upon hearing that Absolut's gift, a necklace with a jet black stone, had been turned in to the lost and found, and being curious and adventuresome sorts, the group struck out through the gate to cross the blasted landscape.

An encounter with some fire elementals and the ambitious flamekin Salamanca leads them to the City of Brass, a burning metropolis whose layered markets and homes serve to furnish decadence to the djinni lords of the waste. Salamanca's trickery leads Reverend Bo to a trader's block to be auctioned off to a crowd, and several of the others join him on that block, their impassioned pleas falling on deaf ears. Only Lucinda remains in the crowd, opting to bid on her newfound friends' freedom. She wins them for a steal, a mere four hundred sovereigns, and they split up to investigate the market, Absolut literally splitting into three to gather information in nearby pubs.

Wizardro, following his wizardly instincts, ventures into a shop that selling a rare novelty on the Plane of Fire...Snowglobes. After a chat with a shopkeeper, he tries to get his magic up to blind another customer in the hopes of snatching his snowglobe so that Absolut at least has something to present as a gift. The victim, the dark sorcerer Tedin, is unimpressed by the display of wizardly manhood. Also a guest at the wedding, he insists he needs to return. An argument turns into a confrontation when it's discovered that he too sought the necklace Absolut brought, and his dark energy begins to draw life from the crowded marketplace to assault the heroes.

Despite the waves of black energy cascading over the marketplace and Tedin's new snowglobe focus, the heroes' assault is too much for him. Between Catherine's fighting quill, Lucinda's grappling hook, and Reverend Bo's immediate mastery of the same hidden geometries that Tedin commands, their attacks are overwhelming. It's Abslout's deft maneuvers that finish the fight however, repeatedly tippling drinks into the teetotaler thaumaturge, leaving him tanked in the dusty market. Retriving the amulet and with the snowglobe as their prize, they head back to the wedding before they can be missed.

Lined up at the mashed potato bar at the reception, the heroes notice that several of them are missing belongings. Money pouches, tools, and Aria's emergency snack supply have been carried off in the hands of a monkey that flees, leaving an ichorous trail as it rushes to its master, the hulking necromancer Brom. They give chase, the brothers and the Ursine confronting Brom, while the others rush after the monkey up a tower. Brom denies all knowledge, angrily responding to Akhbar's accusations, while Esteban steals the necromancer's jeweled belt, hoping to get something from the affair.

Jeff, Aria, and Sir Mandaloria pursue the monkey up the tower and through an arrow slit, Jeff's collapsible lizard skeleton becoming a bit more collapsible after the feat. As they head out into the long grass at the town's edge, Brom opens a portal in the foyer, a skeletal wrestling with whose floor opens up to expose the field beyond the castle, dropping the brothers through it. The Ursine follows, lazily tumbling through the gap after them. Hopping to the top rope, Brom nearly executes a devastating attack on Esteban, but falls short 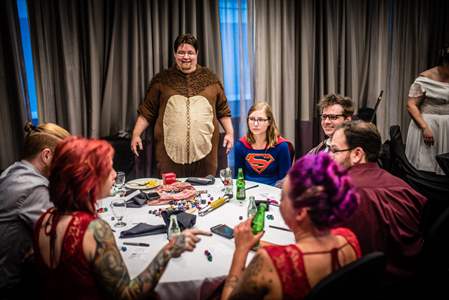 as his foot catches on the closing portal, sending him to the ground.

The tower bound trio, seeing the monkey heading for the group now out in the scrub, beeline for the clearing. As Esteban grapples with Brom, Akhbar, never missing an opportunity to take down his brother, levels a literal beeline at the pair, incapacitating Esteban with sorcerous stingers. Finally the Ursine stirs, determined to calm this mess. Bear hugging both Esteban and Brom, he brings his magically soft fur to bear. The field is quiet until the screeching monkey breaks into the clearing, Jeff hot on its heels, and Mandaloria possessing its tail, tripping it up. Aria, having not eaten for several turns, ends the chase with a word. The insult crackles through the air, splitting the monkey's head in two, and scattering its ill-gotten gains through the clearing.

Revived by the Ursine, Esteban makes a dash for his loot and anyone else's he can collect. Jeff makes the same dash, although with nobler goals. Spying another opportunity, Akhbar unleashes his bees again while gathering the rest of the treasure, but this time to little effect. As the others marshal their way back to the reception to shrug it off and get a drink, Akhbar can be seen fleeing into the night, tossing Aria's snack reliquary behind him, chased by Jeff.

The party is going fine until Lavender sips the punch, tasting the avocado-scented magic of a curse. Determined not to ruin the bride's evening, she casts about for allies to find out how many guests are cursed, and who could have done it. Assembling an unlikely crew of misfits, and finally confessing the matter to Mother, they set about trying to make it right. The first mystery is finding out who isn't cursed. The perpetrators would never drink the punch, after all. With Vivienne shielding the bride in an invisible box, and Drew holding a mystical balloon around Mother, Lavender prepares to kick the avocado curse up a notch. Her spell works almost too well, mixing with the goblin magic of the curse and making guests double over with indigestion. Even Mother is affected, Frumple's shield popping against the spell.

Lavender turns to saving the party, the cursed punch table levitating and surrounded by glowing runes. As the Dark Lady and Vivienne gather ailing guests, and the Ring Bear naps in the doorway to keep anyone from leaving, Frumple tries to redeem himself by eliminating the cursed table. Which he does. Also several other tables. 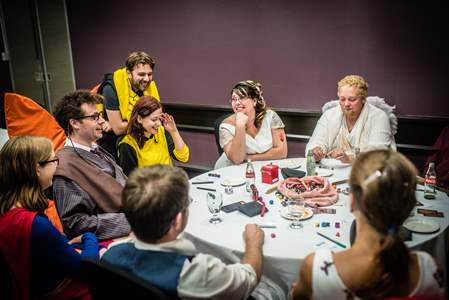 And chairs. And assorted flatware. And nearly a groomsman. The amplification is gone, but the curse remains, and there's no sign of the perpetrators at the party.. Marshaling their animal trackers, they follow the avocado scent into the night.

As Vivienne's mimed dog leads the others through the underbrush, Mother whooshes through the air, riding sidesaddle on Frumple. The trail leads them into a swamp and to the terroitory of the Skinbrand goblins, a tribe of hunters and spellweavers. Confronted by the goblins' scouts, Lavender takes the lead asking one of them why she's not at the wedding. The Slaad of Honour gives the goblin scout a resplendent makeover, narrowing her eyes and commanding "Take me to the person who did not give you your invitation." Not about to argue with the transformation, not to mention a powerful witch-queen atop a ruby dragon, the goblins lead them deeper into the swamp.

The Skinbrand village is plain, little more than thatched huts and a hall, the home of a few dozen goblins eking out a living in the swamp. They scatter when the party arrives, despite Mother's attempt to entice them with a misfired guacamole spell that emerges in a pressurized cutting beam. The Dark Lady spies a few goblins in party dress sneaking in the back of the village, and seizes hold of the shadow of their shaman, salsaing him into the open while the Ring Bear sits on the others. The heroes interrogate him, but it's the cat who sneaks into the goblins' hall and spies the altar to the dark goddess Erzulie pulsing with the power of a curse. Everyone rushes to the hall, learning this, but it's Lavender who tries to break it, mustering all of her power, making over the hall in flowers, and sending floral blasts through the night sky. Finally she takes up the cat in a maneuver they call the hairball special, hurling the explosive feline at the altar, where he detonates, cracking the floating stones and breaking the curse.

With the curse broken and Mother satisfied, they head back to the festivities, bringing the makeovered scout along to have the evening of her life.

More articles from this author